This Google Chrome extension helps you block out internet trolls

The internet can be a volatile place. A wrong word here or a misplaced phrase there can open you up to a flood of toxic abuse. Now, more than ever, we have to be careful about what we say online as harmful comments are easy to make, can affect your mental health, and anonymous trolls don’t think twice about throwing them around.

Thankfully, on the surface at least, the mental health of users is now a huge concern for the big tech players. We’ve recently seen initiatives from Facebook, Instagram, Google, and Apple to help users monitor and better control how much time they spend on their phones. We’ve also seen Instagram take the fight to bullies who use the platform to attack other users. The next evolution in this effort is Tune, an experimental extension for Google Chrome.

Tune works something like the volume control on your Bluetooth speaker. It gives you control over the level of toxicity you’ll be exposed to when you’re using Google Chrome. You can set Tune to anything between “no comments” and “all comments.” Your settings will block comments based on how disturbing and vile they are. We’ve seen an extension like this before, but the reason Tune should grab your attention is because of who is behind it.

If you think something like the above sounds to be a subjective judgment, you’d be right. That means the Tune app is built with a magical AI algorithm. The algorithm is called Perspective and was developed by Jigsaw, which, like Google, is a subsidiary of Alphabet.

Perspective was developed to spot abusive language and has since been used for two main purposes: “helping community managers find and respond to toxic comments, or helping authors improve their contributions when their posts might violate community guidelines.”

In the Medium post announcing the launch of Tune, the Jigsaw team celebrates the use cases stated above but also cites the fact that they only apply to a very niche subset of internet users. Most of us aren’t community moderators or content authors; we’re readers. The Tune extension is a way for Jigsaw to get the abuse-spotting Perspective into as many hands as possible.

6 Chrome extensions to make you more productive at work

Be more productive with these 9 Chrome extensions

This is how to make Google Chrome more secure

How to save articles to read offline in Google Chrome

Once Tune is installed, users can block toxic comments based on criteria like attacks, insults, and profanity. The team does mention that the technology is still experimental, however, and that some toxic comments will still find their way through the emotional firewall. All feedback on the open source software is welcomed via an built-in messaging system right there in the extension. 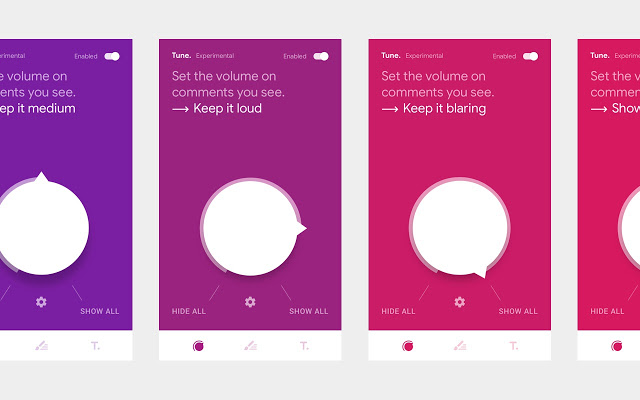 Tune is an empowerment tool. The team behind the extension cite research from The Pew Center that shows 27% of Americans have chosen not to post a comment online because they’ve witnessed harassment. Tune is designed to ease this fear and so enable people to add their point of view to online conversations. What it isn’t, however, is a defense against directly targeted harassment.

If you’re the victim of direct harassment, you’ll need to take more serious action to keep yourself safe than downloading a Chrome extension. If, on the other hand, you have something positive you’d like to say but you’re afraid to say it, download Tune and go get it off your chest.

Social media worse for mental health than we thought